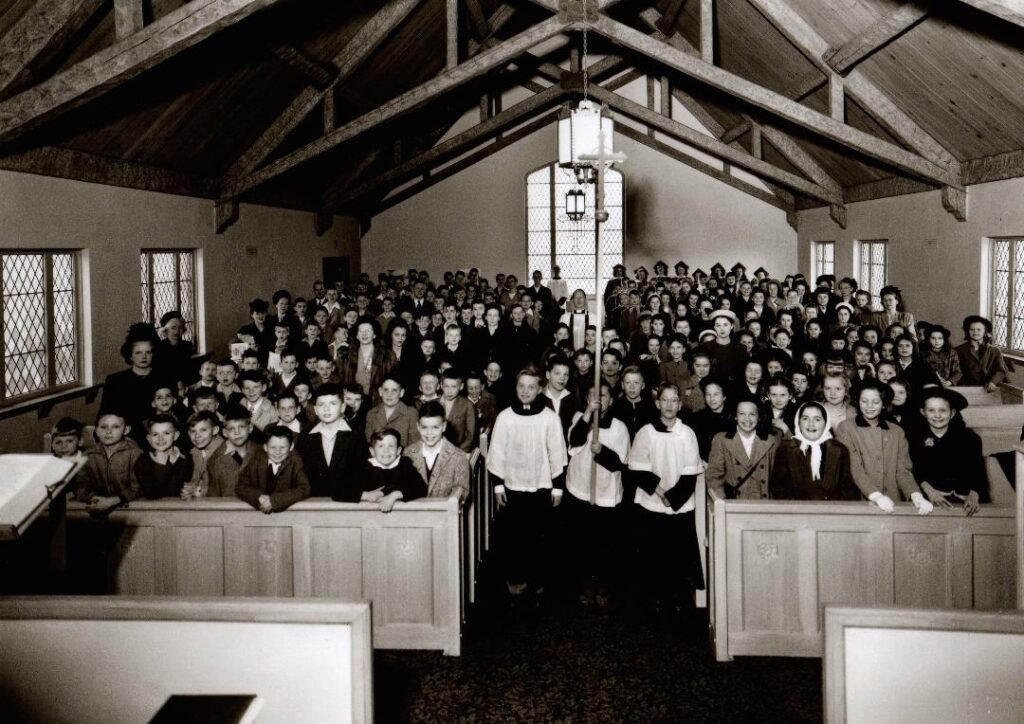 There were really three stages to the formation of St Stephen’s:

1924-1940, when services were held intermittently in the home of Rev John F. Pritchard

1940-1942, when Articles of Incorporation, brought into being St. Stephen’s Community Church Association

Easter of  1942 – A worship service was held for the first time in the newly completed church, now our Chapel. Although the structure was completed after Pearl Harbor when it was difficult to get materials, the efforts of an inventive and ingenious building committee resulted in a building that looks as if it has always been where it is now. It fits the site and is dear to every parishioner who attended it then and worships here today. But what preceded it? What lead to the construction of this very special church?

Mr. Anhalt had never designed a church, but had seen pictures of many English country churches while researching ideas for his beautiful apartments and incorporated these in the design. As it turned out, Mr Anhalt eventually offered to build the church himself in one year for the $18,000 they had on hand, doing most of the work with volunteer church labor, and fundraising as he went. WilliamWhitely, his friend and colleague, assisted him with the specifications and only charged for the drafting. Since we wanted to keep the costs down, we decided to use only readily available materials, with cedar and sandstone being our first choice:

Wilkinson Sandstone and Quarry gave us a special price because we were building a church.

Matheny and Bacon gave the beams and heavy timbers at half price, with knotty cedar paneling for ceiling.  The cedar came directly from the loggers in Aberdeen in big planks to be sawed into tapered siding.

Colonial Shake agreed to let us use their sawing equipment on Saturday as long as they furnished one man to run the machines and we supplied the helper. In two Saturdays we sawed all the siding, only paying the wages of the operator.

Pioneer Sand and Gravel and other concrete companies –  loads of concrete.

Sodergren’s Cabinet Shop University Way stored Anhalt’s ash lumber and agreed to prepare the finish material if someone would help him. He did the trim for the inside and with Anhalt’s help, constructed the pulpit, lectern, and altar rail, charging only labor.

Nysen Glass Roosevelt Way did windows for Anhalt’s apartments and billed the church at half price.

The old growth timber beams were hand adzed and antiqued by Anhalt, according to his own method. The carvings in the chapel were done by Ole Sunde, from Norway, who also did the carvings at Epiphany Episcopal Church, Seattle.

The kitchen of the church had to be equipped and this project was handled by the ladies. They raised their own money and furnished it in the way they wanted to. They gathered at members’ houses and not only made vestments, but raised money in many ways, including the popular St. Stephen’s Bazaar. They always served a dinner the night before the bazaar and it was a very successful fund raiser.

Donations for the building (choir cross), sanctuary and altar furnishings were given at that time and afterwards.

The first Christmas was beautiful. The Forestry Department donated trees to the church and Ted Parsons went along with me to get the trees and the boughs. There were garlands for all the windows and a big eighteen foot tree at the back of the church with decorations furnished by the people in the Parish. That first Christmas, we had 350 people there and some had to stand outdoors. “It was a glorious time –  to have the church all finished and filled with people.”

Adapted from  Fred Anhalt’s  “The Beginnings”  A personal history of the building of St. Stephen’s Chapel, 1982 and John Veblen’s “ If We build it, They Will Come” History of St. Stephen’s,  1992. 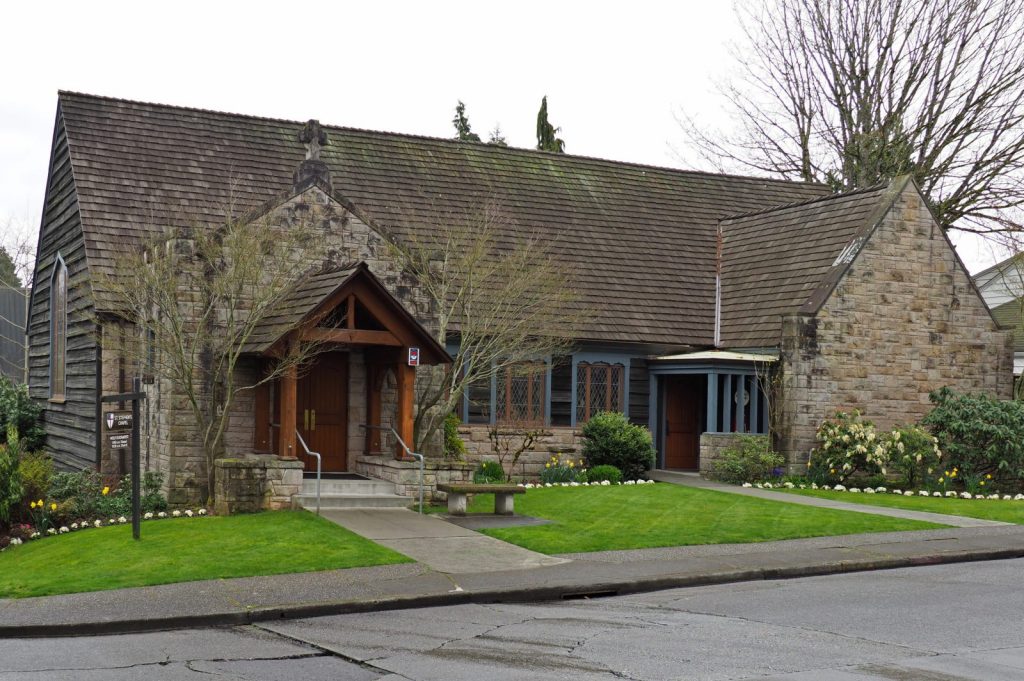 The idea for this came about after several ladies from Epiphany Parish attending the Memorial service for my mother-in-law – Jeffra Swanson were surprised that our Chapel did not have needlepoint cushions at the Altar rail. “An Anhalt -designed chapel always had needlepoint pillows.” Her dear friend, Anne Willard (mother of Jane Lyons) offered to needlepoint a cushion in her memory. That started a discussion with Altar Guild members and our Rector, Mike Creighton to look into having some made. We visited the Henry Chapel in the Highlands, St. Thomas, Epiphany for ideas and were introduced to Kerry Ferguson who lived in Madrona. The designs were taken from the carvings on the altar and pew ends. 9 individual kits were put together containing a top and 4 sides.

With the blessing of the Rev. Mike Creighton, we set about notifying the parish, asking for contributions, meeting with the designers, finding persons to needlepoint, etc. It took about a year to finish and the 9 cushions were officially dedicated on Sunday, November 24, 1985. The 2 acolyte cushions and 2 wedding cushions were done a bit later.

Captain Jim Gehrig offered to take a kit to needlepoint while he was away on the USMS Navasota, but I was a little leery to let one out of the country for such a long time. He ended up doing both the Wedding Cushions in memory of Evelyn Koon, who also happened to be one of the needlepointers on another cushion.

All totaled, over 40 persons were involved with this project, including dear Elizabeth Hampson, who did the upholstery.

My husband and I love attending services in the Chapel (when we not at our cabin) and of course, try to kneel on the wheat and shell cushions that were made in memory of our mother, Jeffra Swanson.

We feel very blessed to be a part of St. Stephen’s chapel celebration.